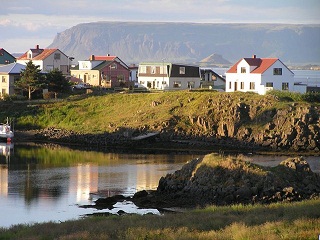 Wild, rugged and colorful, Iceland the land of fire and ice, is a country like no other. With contrasting landscape of black lava fields, red sulphur vents, boiling blue geysers and green valleys. Bays and fjords dot the coast, while the highland offer a unique solitude and wilderness.

Iceland is a large island in the North Atlantic close to the Arctic Circle. The landscape bears the signs of being situated where the North American plate and the European plate meet. (Fact: the tectonic plates drift apart every year by 1cm.) Active volcanoes and majestic mountains characterize Iceland as well as its people and way of life. The country is one of the most volcanically active countries in the world. Hekla, in the south of Iceland, has erupted no fewer than 16 times, and was once described by clergymen as the gateway to Hell.

Scattered around the coastline are small fishing villages and towns bursting with activity and culture. Surrounded by rugged nature, great walking trails, fresh food and warm people, the countryside is a welcoming change to many travelers.

Population in Iceland is 331.600 (May 2016) people and in the capital, Reykjavík, one third of the population lives.

On the south-west corner of the island, set in a broad bay surrounded by mountains, lies the capital city Reykjavik, the northernmost capital in the world. Reykjavík, meaning Smokey Bay gets its name from geothermal hot springs that characterize the city as well as the country. This geothermal power is now used as a natural central heating system for citizens and offers an environmental friendly way of keeping warm in cold winters. Reykjavík is a busy city combining old-fashioned wooden architecture and modern buildings. Despite being a relatively small capital city, Reykjavík has managed to forge a reputation for its nightlife and fun-loving citizens.

Whether you are seeking natural beauty and wonders, secluded places and quietness, good fresh food, fun-loving people, local design and cultural history, activities on glaciers, rivers, mountains, riding snowmobiles, cars or horses. Anyone should be able to find something to their liking in Iceland.

Facts and figures about Iceland

We recommend you bookmark three websites to use when doing a road trip in Iceland: Safetravel.is, Road conditions and Weather report.